Basically, the same as last time, but with the other core word. Good luck and have fun! 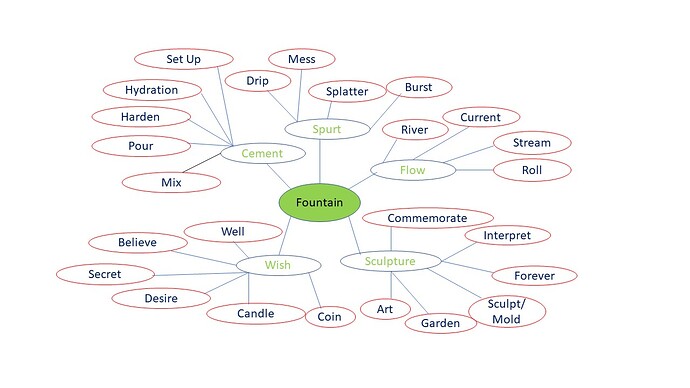 I made this one its own image so that it doesn’t look ultra messy.

I found there are some words that fit multiple inner words, so one could introduce more dotted lines and depart from the strict radial hierarchy - may get a bit messy though.

Some nice words! When you are making this further layer of association, are you being mindful of the original “fountain”? Or is the idea to form this next layer as if each node was a new centre?

Nice words on yours too. Silver frames is fun because I think silver is used in processing film! Erode, decay, crackle, and retreat are especially nice!

For mine, I tried to not use the original words as influencers (yet). Sometimes it creeps in, but if you can disregard the original word, it often leads to more interesting offshoots. For instance, on mine, I might not have gotten to mess or desire if I was letting fountain overly influence me.

I also tried not to re-use words. Many of the same words came to me for “cement” and “sculpture”, but I only recorded them once because later we will start linking/pairing them.